The next morning, the girls got into their little green MINI and started across the bridges toward Jutland – a more remote part of Denmark.  Once outside the city, Purity took over the driving and Bea decided to catch up on a few winks.

“Where are we going today?” asked Purity.

“To the Gateway of the World – Hamburg, Germany,” said Prudence.

“Why do they call it that?” asked Purity.

“Because it’s one of the one of the most visited cities in the world and it has the biggest port in Germany,” replied Prudence.

They drove quietly for a long distance.  Purity decided to bring up the subject of their last meeting in the grocery store parking lot.

“I did not mean for you to stop coming to the store,” said Purity.

When Prudence did not continue, Purity spoke again.

“I miss seeing you there.  I just don’t want to get the parents upset. Respecting their wishes is so…”

“I just wonder when respecting OUR wishes is going to come into play?” asked Prudence.  For example, WE would have liked for you and your sister to come to Grandpa’s memorial.  Yet, even Braiden would not attend.  He said he needed to ‘protect his family.’ Do you understand how it feels to be turned into the family monster?  All because I offered you both an option to stay with me.  Doesn’t that seem extreme?”

“I assumed we had not been invited to the memorial,” said Purity curtly. “We were not told of Grandpa’s passing. Why didn’t you call us?”

“Darlin’ I did call BOTH of your brothers and I know for a fact that Kris spoke to Dad on the day Grandpa died.  Nothing was kept from the parents,” said Prudence.  “Grandma and I were mourners.  Maybe no one ever taught you and the family this but, mourners send out word of death and it is OTHER PEOPLE’s responsibility to show up and comfort us.”

“We would have wanted to mourn Grandpa too!” said Purity starting to get angry.  Suddenly she realized that Bea was still asleep in the back of the car.  She tapped Prudence on the shoulder and whispered these words,”She doesn’t know about Grandpa yet!”

Many minutes passed again before Prudence spoke.  When she did, it was softly and full of kindness.

“Purity, I realize that you are both sick and tired of being caught in the middle of all this adult ego.  You are right.  This was not fair to you.  You are both missing out on getting to spend time with ALL of the people who love you: both grandmothers, both aunts, your uncle Jay, your cousins – everyone you used to lean on are gone.”

“I wanted to say good bye to Grandpa too!” sniffled Purity.  “I need comforting too!” Tears started rolling down her face.

“Park the car for a minute,” commanded Prudence.  Purity moved the car to the side of the road and stopped.  She pulled her sister close to her and hugged her as she cried.  They both cried.

“What’s wrong with you two?” asked Bea.  She was groggy but surprised to see both her sisters in such a state.

“I ran over a squirrel,” sniffed Purity. Bea handed her sisters a tissue each.  The two older girls composed themselves as best as they could.

“What are we going to see today?” asked Bea.

Bea got out her ipod and started listening to her favorite music.  But, she kept an eye on her two older sisters.  Knowing that Bea was watching, the Prudence and Purity drove quietly down the highway.

Once they got to Hamburg, they drove to the Miniatur Wunderland.  They paid the entrance fees and walked inside the huge warehouse type building that housed the exhibit.  Purity and Bea were mesmerized by what they saw…

On the way out of the city, the girls passed by an amazing site – The Bather. 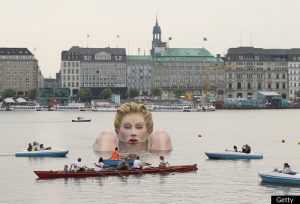 “She looks like she’s getting ready to submerge herself,” said Bea.

“We’ve seen the tall and the small of it today,” said Purity.

“We sure have,” mused Prudence.  She put her foot on the gas pedal and off they went to their hotel for the evening.