The nest day, Bea was driving through the German countryside as they are on their way to the only Grand Duchy in the world: Luxembourg. She decided to ask her oldest sister some questions about herself…

“What was your favorite story when you were little?” asked Bea.

“You mean Snow White and the Seven Dwarfs?” asked Bea.

“Nope,” said Prudence.  “This is a totally different story:

Snow-White and Rose-Red are two little girls living with their mother, a poor widow, in a small cottage by the woods. Fair-haired Snow-White is quiet and shy and prefers to spend her time indoors, doing housework and reading. Dark-haired Rose-Red is outspoken, lively and cheerful, and prefers to be outside. They are both very good little girls who love each other and their mother dearly, and their mother is very fond of them as well.

One winter night, there is a knock at the door. Rose Red opens the door to find a bear. At first, she is terrified, but the bear tells her not to be afraid. “I’m half frozen and I merely want to warm up a little at your place,” he says. They let the bear in, and he lies down in front of the fire. Snow-White and Rose-Red beat the snow off the bear, and they quickly become quite friendly with him. They play with the bear and roll him around playfully. They let the bear spend the night in front of the fire. In the morning, he leaves trotting out into the woods. The bear comes back every night for the rest of that winter and the family grows used to him.

When summer comes, the bear tells them that he must go away for a while to guard his treasure from a wicked dwarf. During the summer, when the girls are walking through the forest, they find a dwarf whose beard is stuck in a tree. The girls rescue him by cutting his beard free, but the dwarf is ungrateful and yells at them for cutting his beautiful beard. The girls encounter the dwarf several times that summer, rescue him from some peril each time and the dwarf is ungrateful each time.

Then one day, they meet the dwarf once again. This time, he is terrified because the bear is about to kill him. The dwarf pleads with the bear and begs it to eat the girls. Instead, the bear pays no heed and kills the dwarf with one swipe of his paw. Instantly, the bear turns into a prince. The dwarf had previously put a spell on the prince by stealing his precious stones and turning him into a bear. The curse is broken with the death of the dwarf. Snow-White marries the prince and Rose-Red marries the prince’s brother. – Wikipedia

“I’ve never heard that story,” said Bea.  “Who were the Brothers Grimm?”

“The Brothers Grimm were German storytellers,” said Prudence.  “Jacob and Wilhelm Grimm collected and published folklore during the 19th century. They were among the best-known storytellers of folk tales, and popularized stories such as “Cinderella,” “The Frog Prince,” “Hansel and Gretl,” “Rapunzel,” “Sleeping Beauty,” and “Snow White.”

“I know those stories!” announced Bea.

“I’m sure you do,” said Prudence.  “Snow White and Rose Red was one of their lesser known stories. It kinda reminds me of the two of you.”

“How so!?” asked Purity who had been listening to her Ipod in the back seat.

“Well, one of you is kind of quiet and likes to read,” said Purity looking at Bea.  “And the other one is outgoing and likes to be out and in the thick of things.” 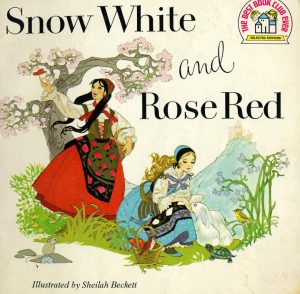 “Maybe Snow White wants to be out in the thick of things too,” said Bea.  “But she cannot.”

“Why?” asked Prudence.  “Is there a Dwarf holding her prisoner?”

When they get into Luxembourg City, it is much smaller and more quaint than they expect.

“It’s like a little European village that everyone has forgotten,” said Purity.

“If it were market day, the square would be full of people,” said Prudence.  The girls waked around for a while and then continued on their way.