The next day, all three girls headed out to explore the capital of Denmark, Copenhagen. First, they visited the mermaid which every visitor has to see in Copenhagen. 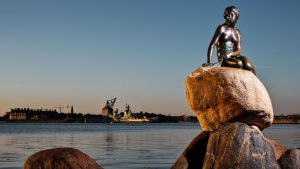 “Let’s go to the Hans Christian Andersen Museum,” exclaimed Prudence.  The long bored looks she received from both of her little sisters told her how uninterested they were in that idea.  “Well, what do YOU want to do?”

“Shopping!” said the girls together.

“OK, but my closet is fairly bursting with stuff that belongs to you both at this point,” said Prudence.  “Let’s compromise…”

“Just hear me out, Miss Bea…” said Prudence.  “We’ll go to the area where the museum is.  I’ll go in and explore the museum and you both can stay close by and shop.  Just promise me, you will STAY TOGETHER!”

“We promise!” both of the younger girls said in unison.

Once the two girls were off on their own, they found themselves in a part of town called Stoget which had all the swanky shops like Louis Vuitton and Christian Dior.  They also realized how expensive everything was.  But they made the best of it as they looked at cheap trinkets lining the streets and waited for Prudence to finish her time in the museum.  They met up again with her about an hour later.

“Let’s take a canal tour, get some lunch and then explore Christianborg Castle,” suggested Prudence.

They boarded the next canal boat tour and started down towards the old city.

Prudence knew her sisters well.  She knew that trying to take them to a real Danish restaurant would backfire if they also did not offer American cuisine.  So, she chose a sidewalk cafe near the canals and they all sat down.

“I’m going to have a hot dog and french fries,” said Purity.

“Be careful to order exactly what you want on the hot dog.  Danes put different things on their hot dogs than we Americans, like fried onions, pickles and sweet sauces.  They also dip their French fries is mayonnaise,” replied Prudence. 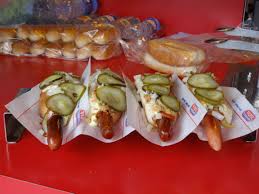 “Fair enough,” said Prudence.  She pulled a few traveling containers of Ranch dressing from her purse and put them on the table.  Her sisters both smiled.

“And we HAVE to try the pastries they have here,” said Purity.  “They look OMG amazing!”

Prudence also ordered a beer with her meal.

“I hear that kids in Europe get to start drinking at a much earlier age than kids in America,” said Bea.

“Remember what we decided in Italy?” retorted Prudence.  “Out of respect to your parent’s wishes, we cannot go there.”

“Speaking of that, why don’t you talk to the parents?” asked Bea. Purity became very quiet.  She looked at her oldest sister and waited for her response.

“Do you remember how this whole thing started?” asked Prudence.

“Yes, Purity told our stepmom that you asked her to come live with you and stepmom got super mad.”

“Yes,” said Prudence.  “And I did extend the invitation to you about a week later. So you were, by no means, excluded from the invitation.

“I mean do you know WHY I offered to let you both come and stay with me?”

“Not really,” they both said soberly.

“Because you both complained about how things were going at the house.  You complained so often that I was really starting to worry if you were ok.  I wanted you both to have another option. But, I would NEVER have kept you from seeing the parents.  I just wanted to give you and the parents a bit of space from one another and some perspective.  Living at my house isn’t all fun and games.  Kris cleans our bathroom when we need it cleaned. He does dishes, he takes out trash – he does errands for me too!”

“We know things wouldn’t have been absolutely ideal,” said Bea. Bea looked at Purity and she was unusually quiet.

“Why can’t you just talk to them?” asked Bea.

“She’s tried several times,” said Purity.  “She sent a letter.  I read it before she sent it.  She apologized to the parents and asked to talk to them. Then she called Dad.  Later, she called Stepmom. No response.

“Bea – I know you think that my trying harder is going to fix this,” said Prudence.  “But, the fact remains that it takes TWO people to have an argument.  If one person (or party) refuses to see the other’s point of view…if they refuse to stop being self righteous and judgmental, there isn’t much that can be done.”

“Bea and I are so tired of how the adults are handling this!” retorted Purity.

“Ok, so tell me what more I can do?” said Prudence turning on Purity.  “Another phone call? Another letter?  Or should I show up at the house only to have the garage door slammed in my face again.  Tell me…what should I do!!!”  Prudence got up and walked off.

“Where is she going?” asked Bea.

“She’ll be back” said Kris walking up.  He’d been invited to join them for lunch.  “She’s not one to get too hot under the collar. What happened?”

“We were just asking her about why she won’t talk to the parents,” said Purity.

“You both need to understand something…” said Kris.  “Dad and Lee need to grow up and start acting like adults.  All that Prudence ever wanted was to have a civilized conversation.  That isn’t asking much in my book.  They made her out to be ‘the bad guy’ before they bothered to ask her about asking you to live with her.  If Prudence was trying to break up our family, would she encourage me to visit you both as often as I can?”

“You hardly ever do…” said Bea.

“Because Dad and Lee aren’t letting me come over!” said Kris.  “I practically have to scream, cry and beg Dad for the few times I do get over there.”

“I didn’t realize it was THAT bad!” exclaimed Purity.

“Yes,” said Kris.  “It’s THAT bad! Prudence is heartbroken over this.  Don’t you both know that?  Grandma is heartbroken too! Believe me, Prudence has gone above and beyond trying to fix this. Give her a break, ok?”

“Ok,” they said together quietly. Prudence came back a few minutes later. The four of them ate their lunch in silence.  Kris finished his hot dog and his beer.

“Thanks for the lunch break, Prudence,” he said.  “I’d better get back to working on those job applications.  Oh, and thanks for being the kind of person who accepts an apology when it’s given.  You don’t break people’s backs when they find out they are wrong. Saying ‘I’m sorry’ to you isn’t so hard to do.”  He looked his two younger sisters squarely in the face as he said this.  He kissed them both on the forehead and left.

“We’re sorry we didn’t believe in you,” said Bea.  Her eyes welled up with tears.

“We’re just so tired of the situation,” said Purity.  “I guess I started to take it out on you.  I’m sorry.”

“It’s ok,” said Prudence.  We are all stressed these days.  They hugged each other.  Then, they spent the rest of the day exploring Christianborg Castle. 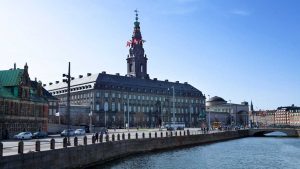