As Bea awoke on the second to the last day of the cruise, she thought about all the people she had gotten to see during the week.  Prudence had made sure that all the people who loved her had been able to visit her.  She turned over in her bed and saw that Purity was already awake.

“Hey,” said Purity by way of saying “Good Morning” to someone you see every morning.

“Hey,” replied Bea.  “I’ve been thinking of all the people we’ve gotten to see.”

“Yeah, I wonder who we’ll see today,” said Purity.  She was aching to see her cousins, Candy and Jenny.  But, Purity wasn’t sure if Prudence and Uncle Jay were friendly.

“Good morning, Ladies!” said Prudence.  “Let’s go get some breakfast.  We have a BIG day ahead of us.”

“Why? Where are we going?” asked Bea.

“We are going to an Ecological and Archeological Park,” said Prudence.

“So, like a zoo with old buildings – sounds kinda sketchy, Prudy,” said Purity.

“OK, just watch the video I found on YouTube and tell me you don’t want to go…” exclaimed Prudence.

“There is a tropical bird sanctuary, coral reef aquarium, a beach to hang out and go SNUBA diving, not mention the underground lazy river you get to swim in.  People call this place the Mexican Disneyland. Its like a zoo, but you are INSIDE the exhibits with the animals,” explained Prudence.

“Yes, and don’t forget your old shoes.  You know, the ones you came in.  I’ll carry them in a plastic bag until you need them.  I think our feet are going to get a workout today. Let’s go!  I’m so excited!” said Prudence.

After breakfast, the girls took the ferry to the mainland and then boarded the coach to take them to the Eco Theme Park.

Once they arrived at the park, they walked into the front entrance. 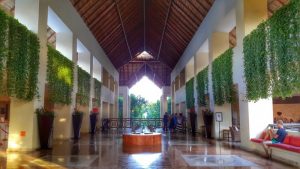 Uncle Jay, and cousins, Candy and Jenny were waiting in the lobby. Jenny had grown up so much since they had last seen here.

“We are both sixteen!” yelled Bea and Candy together.

“God help us Jay. We are outnumbered by teenage girls!” said Prudence.

“Tell me about it,” said Jay giggling.

And that fact became very apparent as the first hour of being in the park was devoted entirely to shopping. The shops were so colorful and full of so many interesting things to look at: Mexican handicrafts, the best of Mexican literature in the bookstore, pirate paraphenelia, and oodles and oodles of chocolate. 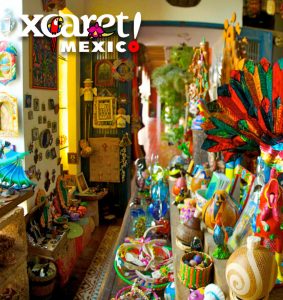 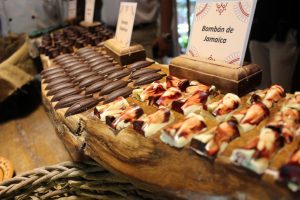 “Did you know chocolate was invented in Mexico,” said Candy.

“I believe it!” said Jenny grabbing another piece.  It tastes so different from chocolate in the US.”

“Mexicans put a chili powder in the chocolate,” said Purity.  “Gives it a kick! I’m so wired right now!”

“So let’s get a locker for all this stuff and swim the underground river,” said Uncle Jay.  “That’s what I wanna do!”

And that’s just what they did.  They found a locker, put on their pink life vests and swam with a family with two young boys the half mile of lazy and underground river –

“Wow! THAT was amazing!” screamed Jenny!

“Calm down, Miss!” said her father.  But he was smiling.  It was all good.

Next, they walked around the ecological park.  The feathers of the parrots and toucans were so colorful against the green lush jungle and the azure blue sky.  They went to as many attractions as their feet would carry them to. Prudence really wanted to see the Mayan Ruins and Village.  So they spent a short time there too.

“We were studying the Maya in school,” said Purity.

“So, you’ll have lots to say when you get back,” said Uncle Jay.

They made their way to La Laguna Restaurant and Buffet and had some lunch. Their lunch was free with admission and the girls had a wide variety of food to choose from all over the world including oven baked pizza.  The Mexican food was a bit different from the Mexican food they had seen in the states. Uncle Jay was VERY happy to discover that beer was included in his meal. 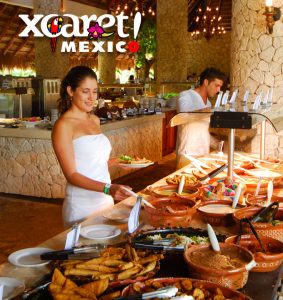 Finally, they made it to the white sandy beaches.  Prudence found herself a wooden lounge chair and refused to move from it for the next few hours.

“Not me!” said Bea.  “If you guys are hanging out with sharks,I’m staying here with Prudence.” So Uncle Jay, his two girls and Purity went swimming with sharks.

The beach was so beautiful.  The breeze wafted such amazing smells of flowers.  It was truly paradise.  Bea wanted to soak it all up.

“Having fun?” asked a familiar voice. Bea looked up.  Braiden was looking down at her.  He leaned down.  “Where is Prudence?”

“She went to get us SNUBA reservations,” said Bea.

“You are NOT supposed to be here,” said Braiden.  “I’m going to let Mom know what you and Purity have been up to…”

“And how are you going to prove it?” asked Prudence walking up with sodas and chips in her hands.

“By their shoes.  They are obviously different shoes that Mom did not buy them.  They are worn through.  Have you been walking in sand in THESE shoes?” asked Braiden as he picked them up off the ground.  But the silver sparkly shoes disappeared like sand running through his fingers as soon as he reached a standing position.

“You were saying?” inquired Prudence.  “I love you, Braiden. But, go home and mind your own business.”  Prudence got back into her lounge chair.  She pulled Bea close to her.  “Close your eyes Bea.  Breathe in peace, Breathe out joy.” When Bea opened her eyes again, Braiden was gone.

“No my sweet little sister,” comforted Prudence. “Things will happen on this trip to ensure that does not happen.  Our relationship is no one else’s business.  And when YOU turn 18, that will be an established FACT. Please don’t let someone come between us.  I refuse to lose you both.  And that’s the way it is! Now, do you want Cool Ranch Doritos or plain potato chips?”

The next few hours, Bea and Prudence talked together.  Bea was shaken up by the experience with Braiden. But Prudence reminded her that anyone who makes you feel afraid is not someone you should not trust.

“But is that because you truly fear ME or just getting caught hanging out with me,” asked Prudence. Prudence was careful to help Bea navigate slowly through her feelings.  The slow pace comforted Bea and she was able to talk openly about her feelings of the last few years.

“Our reservation starts in ten minutes,” said Prudence.  She escorted Uncle Jay and the girls to the dock where the boat was preparing to leave.   Once in the water, Bea forgot all about Braiden and his threats. The sea life was so colorful.  How could anyone be worried with so much beauty around them?

All in all, it was a spectacular day!  The girls were disappointed when they had to say good bye to Uncle Jay, Candy and Jenny.  They were also bummed when they realized they would not get to stay into the evening for the big Folklorico show that was being presented. The ship was leaving port for the long voyage back to Fort Lauderdale.

“Can we come back here again, someday?” asked Bea.

“How about for Spring Break?” asked Purity.

“We already have reservations for Spring Break,” said Prudence.

“Where are we going?” asked Bea.

“Did you enjoy seeing the jungle animals here in Mexico?” asked Prudence.

“Yes,” said the girls in unison.

“So, during Spring Break, we are going on an African Safari,” beamed Prudence.

“But we’ll make it back here again, I promise,” said Prudence.  How about next Easter break?”

“Sounds good!” said Bea.  She yawned.  She was exhausted.  She was so exhausted that she slept leaning on Purity’s shoulder all the way back to the ship. Purity smiled at Prudence.  It had been another amazing day.