My kitty is sitting right next to me as I type this.  She says “Meow” which means – Hi.

I hope you enjoyed the Valentine story that I wrote for you entitled: A Roman Holiday.  I take a lot of ideas from movies (which explains why I have ENDLESS resources to draw from for things to post about.)  Here is a scene from the movie, Roman Holiday with my favorite actress, Audrey Hepburn.  This was one of Audrey’s first Hollywood movies, yet she won the Academy Award for Best Actress because of it. You probably remember her picture in my apartment.  That picture now hangs in the main bathroom (off the first guest room).

Audrey Hepburn did not have an easy life though.  During World War II, her uncle was executed in retaliation for an act of sabotage by the resistance movement, while her half brother Ian was deported to Berlin to work in a German labor camp. Hepburn’s other half-brother Alex went into hiding to avoid the same fate.  Hepburn suffered from malnutrition, developed acute anemia, respiratory problems, depression and edema. Yet, she also acted as a courier for the resistance, delivering messages and packages.

She’s dead now, but she lived near a lake too: Lake Geneva in Switzerland.  What a beautiful home she had.  She lived there for thirty years.  You can see why looking at the picture. Her home was named La Paisible which in French means, the peaceful. 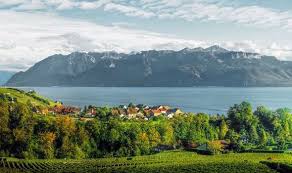 Anyway, I hope her story inspires you.  She was an incredible woman.  I do not consider myself ANYWHERE in her league, but I hope I’m inspiring you to eat healthy, drink lots of water and work out hard during P.E. class.

The movie, Roman Holiday, centers around a royal princess who gets frazzled by her relentless schedule of duties.  She decides to run away from them for a day in Rome. A journalist, played by Gregory Peck, finds out and follows her.  He shows her the eternal city and falls in love with her.  The ending is sad, but so good! The full movie is on YouTube if you are really interested. So, here is Audrey Hepburn in a Roman Holiday.  XXOO.  Have a beautiful day, my princesses.