On day three, the siblings decided, this had to be the day they got serious about seeing the local animals. The conservancy was home to all kinds of African animals including lions, elephants, giraffe, cheetah and zebra.

“I want to see the giraffe,” said Bea.

“Oh, believe me,” said Prudence,” You are going to do more than see Giraffe on this trip.  In fact, I’ll bet you actually have breakfast with one before our trip is through.”

“I’d like to get close to the cheetah and the lions,” said Purity.

“Are you CRAZY!” exclaimed Bea.

“We’re on an African Safari, right?” asked Purity.  “Isn’t that what you are supposed to do?  Get close to wild animals?”

Ben, their driver, knew of the perfect place to find cheetah and lions.  They all got into the Land Rover and headed off on another adventure together.

Ben brought the four siblings to a field where he knew a family of cheetah were hanging out.

“This is Honey, the cheetah mother and her three cubs,” said Ben.

All of a sudden, Ben stopped the Land Rover.

“Look! A male lion is walking right towards the three cubs,” announced Ben.

“Can the mother outrun the lion?” asked Kris.

“Sure she could,” said Ben.  “But she probably won’t leave her babies.”

“Are they going to die?” asked Purity.

“UGH!  Thank goodness that lion decided to move on!” said Bea.  “I was NOT looking forward to watching the survival of the fittest!”

After a quick picnic lunch, the siblings decide to drive into Nairobi to the Elephant Adoption Center. Here, they are taught how the elephants are retrieved from dangerous situations in the wild.  They watched baby elephants receive care in the veterinary clinic.  And they were actually able to help feed baby elephants their milk and give them baths.

“I’m going to need a bath after today!” said Purity.

Later, they watch as another guest gets up close and personal with a baby elephant.

“That was amazing!” said Prudence.  “I did not know elephants could be so cuddly!”

They all got back into the Land Rover and started back.  It had been an amazing day.  On the way back to the conservancy, they saw warthogs, ostrich and zebras grazing on the grassy savannah. 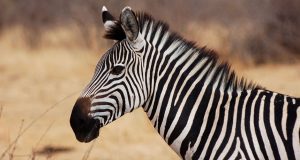 When they arrived back at Ol Jogi, they all decided to get into a quick shower before jumping into the swimming pool. Prudence wasn’t much for swimming.  She decided to spend a bit of time alone in her room.

“So what’s it like living with Prudence?” asked Purity.

“It’s good, actually.” said Kris.  “We get along pretty well.  She had a lot of rules for me to follow.”

“Like what?” asked Bea shooting water from her nostrils after coming up for air.

“Well, she doesn’t like pork in the house, so no real pepperoni on her pizzas,” said Kris.  “She likes to be off by herself sometimes too, so I try to stay out of her way.  She stays out of my way in the morning when I’m quiet too.”

“I remember that!” said Purity wistfully.

“You do?!” asked Kris is a mocking mad tone.

“Yeah!” said Purity.  Bea knew what was coming next.  She stepped out of the way as Kris and Purity went for each other in a mock water fight.  Kris won the fight, but Purity took him down a few times.

“I know,” said Purity laughing. She was feeling pretty good right now.  Big brother knew her strength, and she was graduating in a few short months.  Life was good!