After cleaning the town hall most of the morning, the girls took their lunch in the passageway closest to where the Congress was meeting.  It did not seem to matter where they were, inside or out, it was sweltering hot!  There was no ice in the 1770’s, so the girls drank warm water, and ate bread, meat and cheese for their lunch.

It reminded Purity of the time Prudence had taken her on a field trip to a Colonial town.  Purity remembered the spartan lunch the children had, the candle dipping and the apple press.

Inside the assembly room, the men were arguing voraciously.  Then one of them opened to door.

“Perhaps we can get more air in this room. Its so stuffy!” remarked a tall man with red hair.  He left the door open.  The girls could hear what was being said.

“Thomas Jefferson is taller than I thought he’d be,” said Prudence.

“And that one that’s always talking, I think that’s John Adams.  He’ll be our second president,” said Purity.

“Is the Congress meeting in this room?” a gentleman’s voice asked. The three girls looked up and saw a man who they thought might be George Washington standing in wait for their response.

“Yes,” they said in unison.  The man moved immediately through the doors and found his way to the Virginia delegation.

The girls listened as the men got some very bad news…

“He doesn’t seem sure he’s up to the task of leading the army,” said Bea.

“Maybe if we tell him a few things about the future. Surely it would be better if he KNEW we were going to win the American Revolution,” asked Purity.

“No,” said Prudence.  These men must find the courage to take on the British Empire without any help or reassurance from us.  In fact, General Washington lost many more battles than he won.  He had very young and raw troops to lead. Going up against a king and his empire had never been done before. We should not have won the American Revolution. But we did.  You must risk in order to receive reward.” Prudence winked at her sisters as she went on about her chores.

The afternoon passed, and they went back to their room above the print shop to freshen up before going down to the kitchens to start Dr. Franklin’s dinner meal.  As Purity walked into the room, she saw a pink envelope on the bedside table next to a lamp. 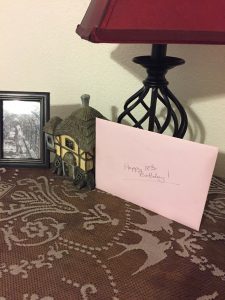 “It’s not my birthday yet,” remarked Purity.

“You thought we forgot,” said Bea.  Bea handed Purity the card.  Purity opened it.  Inside was a very important looking paper – the pink slip to her sister’s car.  Prudence was GIVING Purity her car. Purity had wanted that car for a very long time.

“Oh, thank you so much!” Purity jumped into her sister’s arms.

Bea was smiling as her sister signed her name onto the pink slip.  “Happy Birthday, Purity!” she said when her sister finished writing.  They all hugged.

Later that evening, after Dr. Franklin had his dinner and was sitting by the fire with a good book, the girls stole upstairs to have a bit of birthday strawberry shortcake.

“You can make strawberry shortcake in the 1770’s?” asked Bea.

“Of course!” replied Purity. “Cake is made from flour, eggs, milk, sugar and baking soda.  All of those things exist in the 1770’s.” Several other servants in the house joined in to wish the birthday girl well.