The next morning, the girls decided to go to breakfast at a real New York City diner and then do some serious shopping.  They didn’t buy much, as they couldn’t bring much home.  But it was fun looking in the decorated store windows. 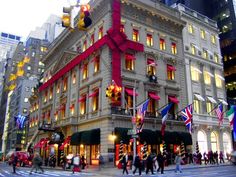 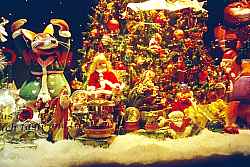 After lunch, it was clear that the fast pace was getting to be too much.  The girls decided to slow it down just a bit.

“Which one do you want to see?” asked Prudence.

After little debate, the girls decided that seeing the musical Aladdin would be fun.  They found tickets still available on the Internet and took a taxi to the theater.

The theater was packed with people.  But after the lights went down, Purity caught herself getting wrapped up into the story of the “street rat” Aladdin and the beautiful princess, Jasmine.

For dinner, the girls grabbed take out Chinese food and took it back to their hotel suite.

“Isn’t it Chanukah, Prudy?” asked Bea. “When are you going to light your Chanukah lights?”

“I have been lighting them, when I’m alone in my room,” said Prudy.

“We’ve seen you light Chanukah candles before,” said Purity.  “Light them again and do that blessing that prays for daughters.  I like that blessing.”

“You remember that?” asked Prudence.

After dinner, Prudence lit the candles and explained how the menorah lighting works.

Then, she made her hands into a strange configuration: 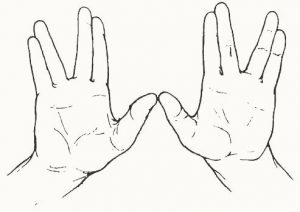 Next, she sang the song that mothers sing in blessing of children…

The girls all hugged.  It is a special night.  It is a night in which the girls realize just how much their oldest sister loves them.  How, like the ancient Arabian storyteller, Sheherazade (Sha- hair- i-zad) Prudence keeps telling them story after story helping them keep their heads high and their attitudes as positive as possible.

“How about we watch the movie, Eight Crazy Nights!” said Bea.

And all the poop, fart and “moon jokes” in the story keep the girls laughing well into the evening. 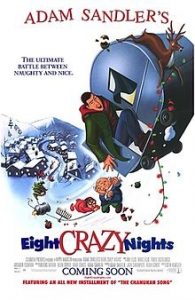