I know I said I was going to talk about Win-Win situations this week.  And I will.  But something came up that is WAY more important to address: when you just gotta say what YOU are feeling…

Yesterday, I had a meeting with our temple president and our rabbi.  The president is trying to get our High Holiday music rundown sheets together and this is the third meeting we’ve had about them.  I’ll cut to the chase, I’ve been really irritated with her (the president) for some time over this and that.  We have our meeting and my feelings were just seething.  I’m just to the point where I am sick to death of stuffing my feelings down and pretending I don’t care.  At the end of the meeting, my singing partner, Dave makes the mistake of assuming that I’m not as angry as I am.  “I knew you’d chicken out,” he said.  Wow!  REALLY??!!

I tell him he doesn’t know everything he thinks he knows (I’ve kept stuff to myself because I don’t want to be the Drama Queen who starts stuff).  But now – it’s on!

At this point – I DONT CARE IF I DO SEEM LIKE A DRAMA QUEEN!!!

The president comes into the classroom of our temple.  I close the door.  You know me.  I’m still pretty composed even though my hands and my voice are shaking.  I’m going to say my piece. “I resented having to write that long email explaining everything I was doing in Religious School despite that meeting that I had this summer telling you about my plan for the school.”

“I thought you didn’t want to be the bad guy if the kids and parents fail to do what you require,” she said.  “I thought you’d appreciate the board backing you up with a letter to the parents.”

“No, I don’t feel that’s necessary,” I replied.  “I feel backed up. Doing ANOTHER letter to the parents on top of the Religious School Application, the parent/student contract and the binder IS enough. Honestly, Madam President, I feel like you don’t trust me to do this job.”

We talked for a long while.  I had been keeping in about a decade of stuff.  Most turned out to be misunderstandings – as I thought they would be, but I’m glad I said them all the same.  I didn’t blame her for her friendship with a teacher that seems like she’s out to spread rumors about me throughout the school.  I tried to see her point of view in the things she said.

In the end, we hugged and I think she understands better where my head has been taking me.

I do appreciate her words. And I know our president, she’ll back them up with action.

Anyway, I needed to get that off my chest.

So go ahead – write that letter!  Make that phone call! Tell your ex boyfriend that you WiLL NOT put up with his less than friendly bullshit. He’s being selfish and you are sick of it!

This is the time to find your” bigvurah”

It might frighten you to realize how strong you really are.  But you need to know your own strength so you can exercise it when you need it.  No one likes a wuss…someone who just keeps taking bad behavior and turning the other cheek. The famous Medieval Jewish Scholar, Maimonides, put it this way: 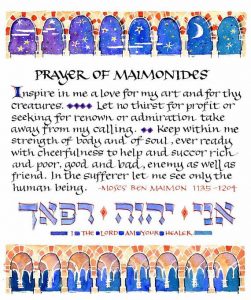 This quote talks about being so strong, it isn’t just a physical strength but a spiritual strength.  You are SO strong, you are cheerful – even when dealing with your enemy.  WOW!  That’s big bigvurah! I’m not quite there yet, but I’m aspiring to it. Gives you something to thing about doesn’t it?  Having a big toothy grin on your face as your “enemy” walks up to you.  Maybe I’ll try that when that teacher comes walking up to me?!

And if that quote does not drive home my point well enough, perhaps the incomparable Katy Perry can teach you to roar better than Maimonides,could.  Take it away Katy Baby –