I’m all booked for my trip through Europe (California.)  So what the heck does that mean?  Let me try to explain.

After much thought, I decided that I REALLY wanted to go to Europe this summer.  But – I do need to save money for my friend’s wedding in October.  So, I decided to do the Solvang, Hearst Castle trip.  After just a little research, I kinda got the feeling that I was finding “Europe” right here in our sunny state.  I actually found a train that goes from Denmark to Spain in Europe.

I decided to design a trip as if I was really there.  Here is my itinerary:

Day 1: Drive up the coast to Santa Barbara – lunch in a posh Danish restaurant called Andersens.  About an hour up the coast from Santa Barbara is Solvang.  My hotel has an indoor pool (’cause it’s cold in Denmark, don’t ya know!) and is located in the heart of the downtown Danish village.

Day 2: Drive further up the coast to San Luis Obispo and take the train up to San Francisco. The Coast Starlight train experience is supposed to be one of the most beautiful train rides in North America. I’ll get into San Francisco late that evening. There are no German themed hotels (that I can find) in San Francisco.  But there is a French themed hotel: Cornell Hotel de France.

Day 3: San Francisco: I’ll probably sleep in a bit and eat a very light breakfast.  I’m sure I could hit the Holocaust Memorial before lunch.  If I went to Germany, I would feel honor bound to visit the concentration camp, Aushwitz. Visiting the memorial would be a slight nod to that obligation.  Lunch will be a Schroeder’s Historic German Beer Hall. 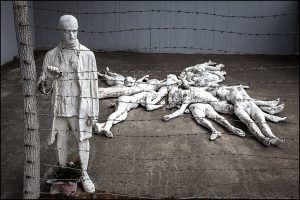 After lunch, it will be all about France.  When I was in France, a few years ago, I rode the Hop on Hop Off bus all over the city.  I saw such amazing sights.  The Classic Tour on the San Francisco bus includes such sights as The Golden Gate Bridge and Park, Fisherman’s Wharf with its antique penny arcade named Musee Mecanique. Later that evening, I have already bought a ticket to see La Boheme at the War Memorial Opera House. La Boheme is about a French couple who is in love, but will be parted by tragedy. 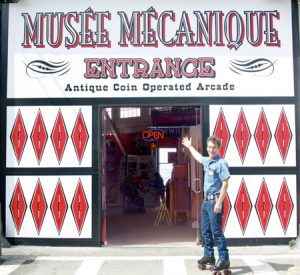 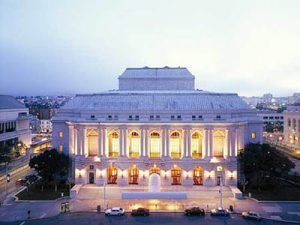 Day 4: I will get on the train bright and early the next morning and go back to San Luis Obispo.  My train gets into SLO about 3ish. Then, I’ll get back into my car and drive a short distance up the coast to my next hotel: El Colibri Hotel and Spa in Cambria.  Yes!  Now, I’m imagining myself in Espana.  Navarre, Spain is right at the French border and has a seaside resort feel to it. Won’t this be a gorgeous walk to take along the coastline? 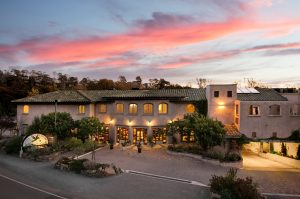 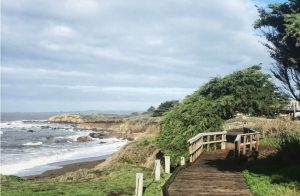 Day 5: My next day will be devoted to Spain and her gorgeous architecture.  And no where is Spanish architecture more beautiful than Hearst Castle.  At first, I thought the castle was inspired by Italian designs. After a bit of research, that seems to not be the case.  At first, Hearst just wanted small bungalows for himself and his guests. Over time, however, his HUGE art collection needed a home so the castle was created, in part to house all his beloved pieces.  The tours of Hearst Castle last about an hour.  I won’t want to stay too long as my last hotel will be waiting for me to check in: The Mission Inn, Riverside, CA. 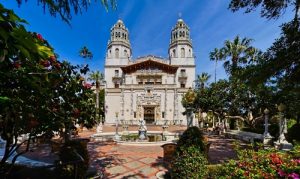 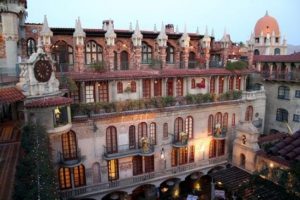 Day 6: My trip will be coming to a close, but I’ll eat a hearty Sunday Brunch before I head home.  I’ll also be sure to visit the Spanish Rotunda before I head “up the hill.” 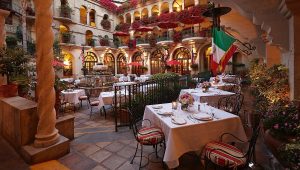 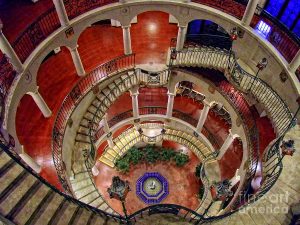