This post is in commemoration of the third anniversary of this website.  On December 14th, 2014, I first started blogging on this Sketchy Scribe website.  Three years later, some things have changed.  But my love for my sweet sketchy scribes will never change.  I love you both – no matter what!  Happy Anniversary sweet scribes!

As we learned last week, the message of Chanukah is that Right does overcome Might – at some point.  And I know what you are thinking, my sweet scribes… NOT ALWAYS!  Yeah, I know.  Life does seem to suck when the bad guy (or gal) seems to be winning and the good guy (or gal) is paying the price.

Maybe it would help you and all my sweet scribes to remember that victory isn’t something that happens in a day.  It comes in stages.  Take for example OUR situation.  As most people who read this website know, our family has been torn apart by an insecure and controlling tyrant.  She SEEMS to have all the power.  In truth, she’s afraid to lose control.  That’s WHY she controls things the way she does.  She’s afraid.  She’s probably a lot like Antiochus – the king of the Seleucid Army.

In the story of Chanukah, the Seleucids (Syrian-Greeks) tried to conquer the land of Israel.  But Judah and his Maccabee Soldiers waged gorilla warfare against him.  They knew the deserts of Israel better.  They knew where to hide AND when to strike.  Over a period of almost a hundred years, the Jews fought this wicked man who tried to take their country and their faith from them.  Yes, a hundred years!  Our family issue has only been going on for four years.

So, how are things going on my side of the “war.”  The answer is overall – good. I did send a four page letter to the parents.  I apologized for my part of the situation within the letter.  But I also gave them both a few things to chew on… And I am keeping busy doing things like going to AVHS to learn about Digital Cinematography.  As I was sitting there watching the class this week, cousin Candy (just protecting your ID sweetheart) came up to me and let me know she was in the CAMP class.  She wanted to know how your older brother Kris was doing.  She came in later and talked to me at lunch.  We had a good chat, I think.  We even decided to be Facebook friends.  She asked me to call Grandma Dot, which I did.  Dot is very sad that she isn’t able to see either of you anymore.  She and I talked for a good half hour on the phone about the situation.  We are also friends on Facebook now.

And for the record… the “war” I seem to be engaged in was not something I ever wanted to fight.  Why can’t we ALL love the children?  Why is it being made into some kind of competition?  Children need our love and guidance in this world.  I guess I’ve always felt that “it takes a village to raise a child.”  I just wanted to be a villager in my sisters’ lives.  I’m not sure WHY that is so threatening??

I’m sorry that Bea was surprised to know I was at school.  I DID blog about my coming several weeks ago (on my October 29th post) so, if she wanted to stay home from school or avoid me, she could.  It isn’t a surprise that Bea no longer reads our website. That’s what tyrants do – they keep people from reading things that will inspire folks to act in their own best interest.  Antiochus would not allow Jews to read the Bible.  He wanted people to read Greek books.  But, the Jews were sketchy!  When they saw the Seleucid soldiers coming, they’d hide their Bibles and play with sivivon (dreidels).  Playing dreidel is very simple.  Get yourself a cheap dreidel and a handful of candy or nuts.  Here’s how to play … 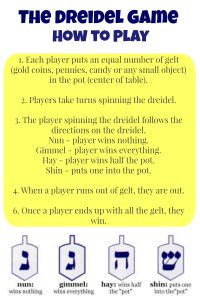 The story of Chanukah spans about 140 years. After the Seleucids left Israel, the holiday of Chanukah was born.  Chanukah is Hebrew for Feast of Dedication.  That’s the festival that Jesus would have gone to as a young man.  Later, Jews started referring to Chanukah as the Festival of Lights.  Eight days of joyous feasting, praying, and celebrating was encouraged of all Jews.  In fact, Chanukah is one of the few holidays in which Jews are encouraged to drink wine and get a little snockered.  🙂

This animated cartoon tells the story of Chanukah.  It shows how both Christians and Jews benefited from the Maccabees refusal to give into the words and actions of a tyrant.  Tryants are still with us, unfortunately, but we must continue to fight them.  Enjoy!