Purity awoke in the morning kind of sad. She knew they’d be going home today.  Her heart ached that she’d have to leave New York and her oldest sister, Prudence.

“Valentines Day will be here sooner than you know!” said Prudence.

“Where will we go THIS year for our Valentines Adventure?” asked Bea.

“Well, I was thinking a Valentines Day Cruise would be fun!” remarked Prudence.

“We’ve never been on a cruise!” squealed Purity.

“It’s a surprise,” whispered Prudence.  “And I have another surprise for you this morning.  It’s in Central Park.  Let’s go!

The girls quickly get dressed including their gloves and jackets.  They scampered down to the park entrance and see a carriage all ready to take them on a snowy ride around the park.

“Come on!  Get in!” said a familiar voice.  A red head peaks out from under the blankets in the carriage.

“Grandma!” the girls yell.  They jump into the carriage and into her arms.

“It’s so good to see you both again!” exclaimed Grandma. “I missed you so much.” The girls sit on either side of the carriage and they thoroughly enjoy their carriage ride through Central Park.

Grandma had lunch with the three girls at a swanky restaurant in the park called Tavern on the Green. 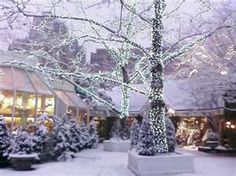 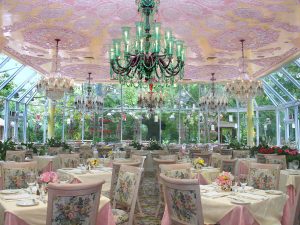 Then it was time to go home.  Grandma and Prudence walked Purity and Bea to the nearest Sephora store.

“Just go in and spray some perfume towards your face,” said Prudence. “When you open your eyes, you’ll be back with the parents.”

The girls slowly hugged and kissed their Grandmother good bye.  There just wasn’t enough time together.  Next, they turned towards their oldest sister…

“Keep the posts coming!” said Bea.  Even if we can’t read all of them, just seeing that you posted them day after day lets us know you are still with us.”

As Purity and Bea turned, Prudence let out a muffled sob.  She was so proud of her younger sisters.  They were so strong and growing into such incredible young ladies.

Purity and Bea walked through the store and over to the perfume counter.

“Which perfume should we use?” asked Bea.

“How about Shalimar,” said Purity.  It’s the perfume Grandma and Prudence wears.  Then we will still be able to smell them when we get back with the parents.” They found the section of the store where the French perfumer Guerlain was sold.  Shalimar was in a blue bottle: 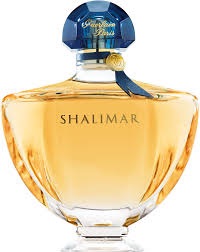 Bea picked up the bottle.

“Ready?” she asked her older sister.

Bea pressed down on the nozzle of the cologne bottle.  The air filled with vanilla and bergamot.